This stamp was recently brought to our attention by egillis indirectly through the Maine Historical Society.  It seems that the VIRGINIA has been an important piece of Maine history for many years. 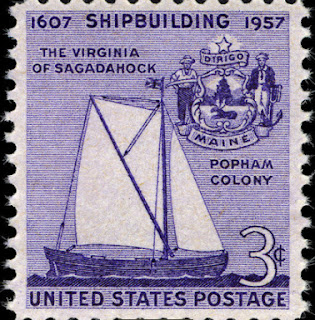 The 3-cent Virginia of Sagadahock stamp commemorating the 350th anniversary of shipbuilding in America was issued on August 15, 1957, in Bath, Maine.
The stamp has for its central design a sailing vessel typical of the early seventeenth century. The State Seal of Maine, located on the upper right area, identifies the incident. Across the top of the stamp is the wording "1607 Shipbuilding 1957." The wording "The Virginia of Sagadahock," arranged in two lines, appears directly above the vessel's mainsail. The wording "Popham Colony," in two lines, is shown beneath the state seal and "United States Postage" appears across the bottom of the stamp. All of the above lettering is drawn in dark Gothic. The denomination numeral "3" in whiteface Gothic and the symbol in dark face are located in the lower right corner. Ervine Metzel, William Zorach, A. M. Main, Jr., and George F. Cary II designed the stamp.
The stamp is 0.85 by 0.98 of an inch in dimension, arranged vertically, printed by the rotary process, electric-eye perforated, and issued in sheets of seventy. The color of the stamp is purple. The printing of 120 million of these stamps was authorized.
Posted by Maine's First Ship VIRGINIA at 5:48 AM

Email ThisBlogThis!Share to TwitterShare to FacebookShare to Pinterest
Labels: stamp